Weighing in on the Twitter spat between IPS officer D Roopa and the popular Twitter handle True Indology over whether firecrackers are Indian or not, Senior Congress leader Abhishek Manu Singhvi has said that it does not suit IPS officers of the country to be arguing with Twitter handles “that too during working hours.” Sharing a piece of advice, Dr Singhvi added, “Make a point, let it go, you aren’t winning anything by arguing on social media!”

Doesn’t befit IPS officers of the country to be arguing with anonymous Twitter Handles that too during working hours. Make a point, let it go, you aren’t winning anything by arguing on SM!

The argument that began with D Roopa questioning the need for bursting firecrackers on Deepavali ended in the suspension of True Indology’s Twitter account.

D Roopa said, ‘Your time is up’: True Indology

Speaking about the “magic that happened on Twitter,” the owner of the page shared his side of the story and said, “One IPS officer from Bengaluru (Twitter India Head Quarters) issued directives to ban Diwali crackers. She said that crackers were not mentioned in ancient texts. I disagreed with her and showed her references from Ananda Ramayana and Skanda Purana.”

The user further wrote, “She asked me for my personal details. I refused to divulge those details. She then said, “Your time is up”. And boom. My account was suspended within 5 minutes. What a sweet coincidence! Twitter sent no mail. Gave no reason. Simply suspended my account. I did not divulge personal details. Hence, I was only digitally eliminated. What would have happened if I had? I shudder to think.”

In another Instagram post said, “Yes, my account has been unfairly suspended. We all know why it was suspended. Yes, it is indeed very saddening and exasperating to see that all the time and efforts put in to cultivate the account went down the drain because somebody took it upon her ego. The account had good reach and it was quite handy in making a lot of people aware of the issues we face as a civilization. As such, it served as a potent weapon to make people aware. I will try to do what I can to restore my account.” The user also thanked people who tweeted in his support.

Several Twitter users have claimed that the True Indology account “just stated facts” and “gave evidence” to prove his point during the argument without “offending or hurting” anyone. Several popular figures have come out in support of the account and have demanded Jack Dorsey-led Twitter restore it. Such is the support that #BringBackTrueIndology is the number one trend on the micro-blogging site at the time of publishing this article. This is not the first time that True Indology has faced action, as many on the Internet have pointed out. 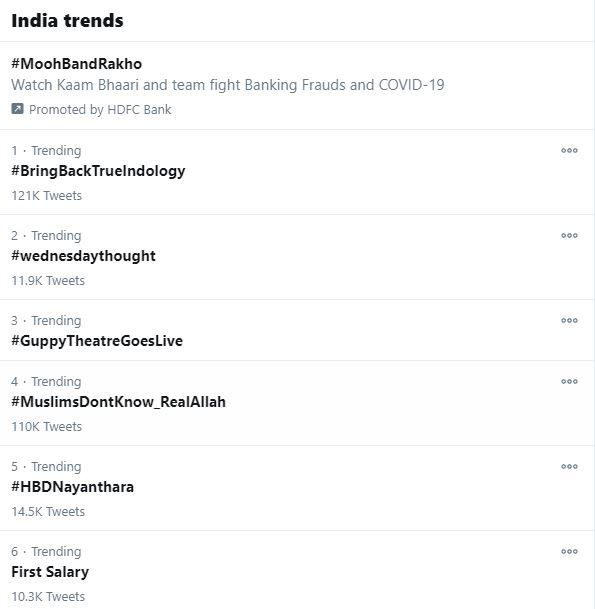 Delhi BJP leader Kapil Mishra said that this is the second time Twitter has “unreasonably” suspended one of the most informative and decent Twitter handles on the platform. OpIndia Editor Nupur Sharma asked, “So what exactly did True Indology do this time?” Author and Scientist Anand Ranganathan also expressed his displeasure by the action taken by Twitter.

A Twitter user also blamed the IPS officer alleging that because of her, the popular handle was taken down. “Bureaucrats punishing common people for challenging their intellect is such a colonial-era mindset. Who gave them the authority to persecute others for knowledge? #BringBackTrueIndology,” she tweeted.

True Indology has been suspended. Yet again. #BringBackTrueIndology

In hindsight, he should have apologised, with his apology notarised by a gazetted officer and handed over in triplicate – one for the Babu, one for the vain; and one for the IPS who lives down the lane.

Bureaucrats punishing common people for challenging their intellect is such a colonial era mindset. Who gave them the authority to persecute others for knowledge? #BringBackTrueIndology

When they don’t have answers to your questions they break your house, put you in jail, gag your voice or kill your digital identity. Eliminating one’s digital identity is no less than a murder in virtual world, there must be strict laws against it #BringBackTrueIndology https://t.co/tvPiWidQez

READ | ‘Which gang were you then part of?’ Sibal asks Shah about PDP-BJP alliance amid Gupkar row

Facebook
Twitter
Pinterest
WhatsApp
Previous articleDelhi: Fine of 2,000 for not wearing mask in cars; 131 COVID-19 deaths recorded
Next articleRatan Tata’s office dog’s name is Goa. Here is the viral story behind it

Is The Monk Who Sold His Ferrari based on a true story? All about the book