Comic: Central Banks Are Inflating the Biggest Bubble in Alternative Assets Yet 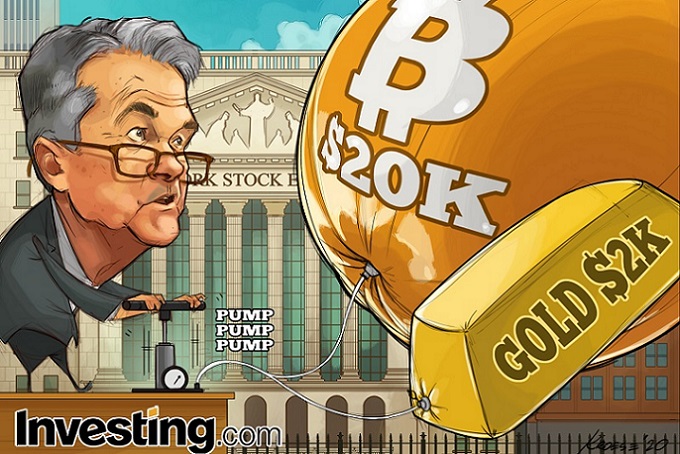 Investing.com –The world’s central banks have eased monetary policy dramatically this year to support the world economy through the pandemic. They argue, and many agree, that they’ve saved millions of jobs and untold amounts of capital in so doing.

The side-effects of that policy – in the form of asset price bubbles – are becoming increasingly clear.

In the mainstream investing universe, it was gold that grabbed most of the headlines during the first part of the pandemic with its record run up to $2,089.20 dollars a troy ounce. In a world where the equities were collapsing and oil prices even dipped below zero, gold’s 32% rally from the start of the year seemed worth the superlatives.

However, that rally is now being emphatically put in the shade by a different ‘alternative asset’: .

For half a century, gold has been the haven that particularly retail investors have sought out at times when they were afraid of currency debasement by the world’s governments and central banks.

That was so when the dollar collapsed along with the whole Bretton Woods system in the early 1970s, when the devaluation of fiat currencies was evident in soaring rates of inflation. But it was also true in the years after the 2008 financial crisis, when consumer prices were stagnant or flirted with deflation, and the only inflation in sight was in the price of financial assets such as stocks and bonds.

With the world economy slowing again, the ECB’s president Christine Lagarde has all-but promised a further expansion of money creation at the governing council meeting on December 10th. The Fed, meanwhile, is widely expected to expand its asset purchases at its policy meeting on December 16th.

But gold has not responded positively to market expectations. It’s down nearly 9% from its August peak.

Bitcoin, by contrast, is going from strength to strength. It’s up 130% for the year to date and its gains have accelerated sharply just in the last month. Why so? With Bitcoin, an asset whose supply is controlled even more tightly than gold, the explanation is always in an expansion of demand. That has benefited from two clear examples of the long-term trend that is the heart of the bull case for Bitcoin: broadening public acceptance.

On the one hand, Paypal’s decision to administer wallets denominated in Bitcoin is a quantum leap towards the financial mainstream for the digital currency. Millions of people who would not trust a poorly-regulated Bitcoin exchange in some remote part of the world to take custody of their money are perfectly willing to trust Paypal – a much more established brand – to do it.

Secondly, there is now a regulated investment vehicle through which it is possible to gain exposure to Bitcoin. Inflows into Grayscale’s Bitcoin Trust have allowed it to amass over 500,000 Bitcoin, worth over $8.3 billion at Tuesday’s prices. Bitcoin is now back trading at nearly $17,000 and looking quite capable of taking out the $20,000 level, according to many analysts.

Disclaimer: Fusion Media would like to remind you that the data contained in this website is not necessarily real-time nor accurate. All CFDs (stocks, indexes, futures) and Forex prices are not provided by exchanges but rather by market makers, and so prices may not be accurate and may differ from the actual market price, meaning prices are indicative and not appropriate for trading purposes. Therefore Fusion Media doesn`t bear any responsibility for any trading losses you might incur as a result of using this data.

Fusion Media or anyone involved with Fusion Media will not accept any liability for loss or damage as a result of reliance on the information including data, quotes, charts and buy/sell signals contained within this website. Please be fully informed regarding the risks and costs associated with trading the financial markets, it is one of the riskiest investment forms possible.

Online banks are just as safe as brick-and-mortar banks, and you may like them if you’re comfortable banking digitally

Official adverts created by the German government last week encouraged the country to be "lazy as raccoons" to prevent the further spread of COVID-19. One of the ads, which was widely shared on social media, shows an old man speaking about how in the "winter of 2020" people became "heroes" after doing "absolutely nothing." Last…
Read more
- Advertisment -