Soha Ali Khan recently took to her Instagram handle and shared a picture with her husband Kunal Kemmu. Fans and followers showered the duo with compliments

Soha Ali Khan can be spotted in a white tank top clubbed with a black bralette. Meanwhile, on the other hand, Kunal Kemmu wore a simple dark grey tee paired with grey shorts. Kunal also donned a cap. Soha Ali Khan and Kunal Kemmu, both can be seen sitting at a table filled with jigsaw puzzle pieces. The two also posed holding some pieces. In the caption, Soha teased that she and Kunal are like pieces of a jigsaw puzzle.

Fans were quick to share their responses. They praised Soha Ali Khan and Kunal Kemmu’s pair and showered them with compliments in the comment section. One of Soha Ali Khan’s Instagram followers wrote, ‘You’re playing Peppa pig, my son loves to play with this puzzleð’, while another added, ‘Hi friends nice good looking both of you god bless both of U’. Some other fan comments include, ‘beautiful couple’, ‘adorable pair’, ‘cute couple’, ‘God bless them’ and more similar praises. Take a look at some more fans’ reactions below. 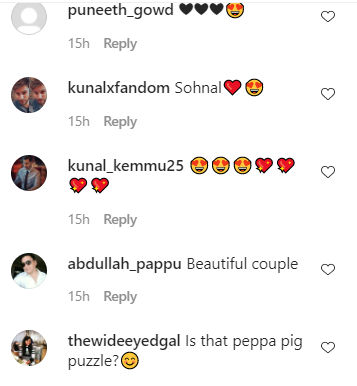 Kunal Kemmu recently shared that Soha Ali Khan was the reason why his English vocabulary has got much better. He made the revelation on Comedy Nights With Kapil. During his conversation with Kapil Sharma, Kunal Kemmu also shared that once during his fight with Soha, he couldn’t decipher a word Soha had called him and had to ‘Google’ it. Soha Ali Khan and Kunal Kemmu got engaged in July 2014 in Paris, tied the knot on January 25, 2015. Now, they have a baby girl, Inaaya Naumi Kemmu. She was born on September 29, 2017.

Get the latest entertainment news from India & around the world. Now follow your favourite television celebs and telly updates. Republic World is your one-stop destination for trending Bollywood news. Tune in today to stay updated with all the latest news and headlines from the world of entertainment.

Is The Monk Who Sold His Ferrari based on a true story? All about the book